May 21, 2016June 13, 2016
I’ve never been to Gaza. From the middle of the West Bank, its hard for to imagine a Palestine on the sea. It was doubly strange, then, to suddenly have to imagine the place under a cloud of air, sea, and tank fire.
At the news desk I edited stories about the goings on in Gaza every day. Right after the morning weather forecast, and the reports of how many were arrested overnight in the West Bank, came the Gaza crossings story. As regular as the sun rising and the mercury climbing, was the report tracking how many grain trucks went in, and (in the right season) how many loads of carnations were allowed out under that single Dutch government initiative delivering a trickle of life to Gaza’s dead export economy.
This was Gaza, for me, who had never been. That, and an amazing correspondent who regularly phoned in features from our office in Gaza City.

Then, on 26 December 2008 I got a message from my colleague asking that I drop lunch and come into the office immediately. Bombs had been dropped on a police graduation ceremony in Gaza City and there were hundreds dead. I was eating a cupcake at the time, a post-Christmas lunch with visiting friends. It felt rather incongruous.

From that moment onward, Gaza was more than just crossing reports.

I would generally be on the phone with someone in Gaza at least once a week, and we had just hired a new reporter who would get exclusive content for the English Desk. She hadn’t signed a contract yet or spent her first day on the job when the war started. Mid-way through the nearly month-long attack I remember looking up on the internet what one was supposed to do if white phosphorus was dropped on her house. The new hire was on the phone with me in a panic. She had heard of people being set on fire and not being able to put it out.
Writing the caption for a photo of a young girl being pulled out of the rubble of a building I had to leave my desk. I felt like a fish out of water unable to inhale. She was grey. All you could see of her was her face, the rest of her was buried. We had a series of photos that showed her being unearthed. She was utterly crushed. She was wearing a pink tracksuit and had her hair tied up.
Curling up in a ball and crying under the desk, however, wasn’t an option.
Long after the intensive attacks finished, I made a bit of a pilgrimage to the Gaza border. I wanted to be able to picture it, to make its geography as real as its people. Even though entering was near impossible under the circumstances, I felt like I owed it to someone, maybe myself, to just go see what I could see.
If you drive straight West from Bethlehem you end up almost directly across from Gaza City. We went to what used to be the main cargo terminal. I think workers also used to enter and exit through Nahal Oz. Its just right next to the Karni crossing, which was dismantled last week, and closed for all traffic back in September 2010.
It seems the signage hasn’t kept up with the geopolitics… but we were the only car on the road anyway.

There is a military base near the now closed goods crossing. Its from there that patrols leave to monitor the area around the fence.
We would get stories about shepherds and farmers being shot at all the time. There is a wide swath of “no go zone” between the fence and where Palestinians in Gaza are actually allowed to be. Even though Israeli forces formally withdrew in 2005.
As we got out of the car and walked toward the 1967 demarcation line, we saw soldiers loading the guns on top of the jeep.

Between 1967 and 2006 this was where all major traffic between Gaza, Israel and the West Bank would be.

The soldiers were not keen on us being there. This is as far as they would let us go. I wasn’t keen on testing them or the pack of wild dogs. So we drove on. 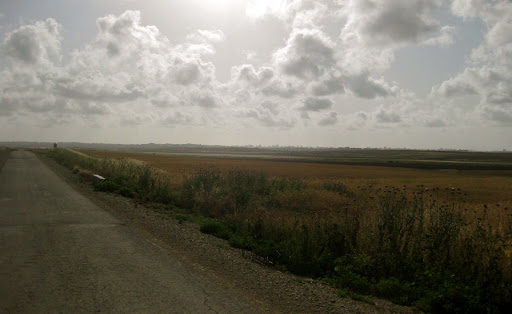 Heading north, I spied a road that cut away from the main highway toward the Gaza Strip. I still wanted to get closer.
The paved road stopped and we continued down the muddy track. There were unused military towers, so we stopped at one of them to try and get a view of the fence and what lay beyond.

From inside you can see the military patrol road in the foreground, and I think Gaza City in the back. 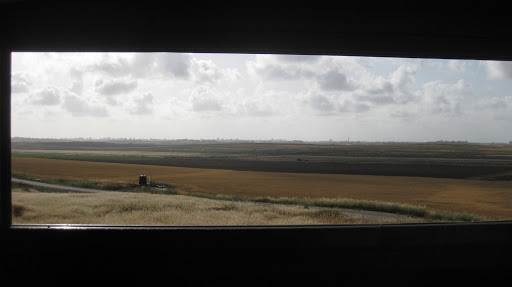 It was frustrating being so close but not really feeling close at all. We continued on in the car until the road ran out, parked, and stepped onto the patrol road, and on through the underbrush.
There were cameras on weather balloons strung up all along the fence. The ground was squelchy and we weren’t sure how close we could go, or should. One step at a time though, we walked up to the fence. There was Gaza. 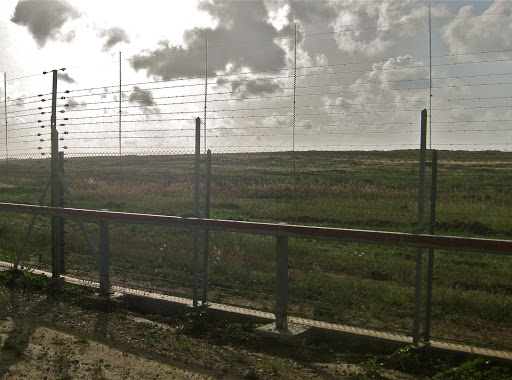 Off in the distance there were shepherds, some young men out for a walk, and sheep wearing bells. The sounds wafted in the breeze. The sea breeze. Palestine on the sea. 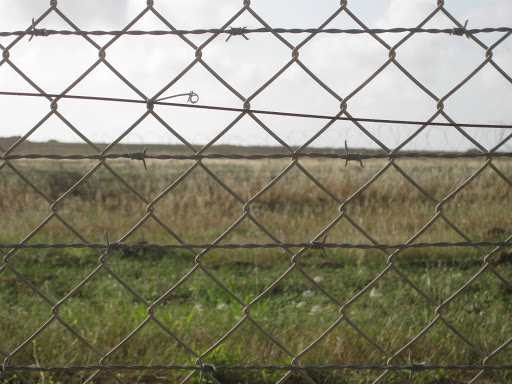 You can make out the barbed wire on the far side of the chain link. I gathered that it demarcated the “no go zone.”

And behind the barbed wire coils, sheep. Gazan sheep.

The news agency published a follow-up story this week, one about a teenager who was injured during the 2008-9 attacks on Gaza. I’m almost certain I edited the story about the death of the two boys he was with the day it happened.
Still strange to have stood at the fence looking in. To have written about death and injury, to have taken on the responsibility to communicate that with my colleagues at the agency. And to read about a young man three years later, blinded in one of the bombings: “It would be great if someone could take me to the desert and leave me there, that way I wouldn’t have to see people.”
And its still strange. To know so much about those losses, to have had my life invested in them, and yet to stand on the far side of the fence looking in.