After discovering I’ll likely be stranded in the Middle East without a passport for the next month, my beloved Jerusalem once again dolled out a delightful surprise Wednesday, and I stumbled upon part of the Glenn Beck rally at the Israeli municipal buildings.

The event was titled “Restoring Courage,” presumably to Israel, though I’m not sure that is what the state lacks. Also not sure if Glenn was aiming at the “people” or the government with this boost.

Not exactly a follower of the American gentleman, I was nonetheless curious about the much-touted event.

Who, I asked, were the folks that would sit for an evening to watch Glenn declare his support for Israel.

There’s Glenn on the screen. This, we learned, was just a satellite event, the big show was down in the Old City. Still, there were a lot of people here to watch.

My powers of observation deduced that almost all of the people in the audience are white. Which is interesting, because we are not in Europe, or parts of North America.

It seemed that there were quite a few other folks who were there just to check it out too. These guys (those I heard spoke English with an American accent) seemed to be hangers-back like me and E.

What we also realized part-way through, was that American and British tour groups were seated at the front. None of those first 10 or so rows had anyone wearing a kippah in them. The back 40 rows (ish) appeared to be at least 90% Israeli/Jewish/some combination of the two. 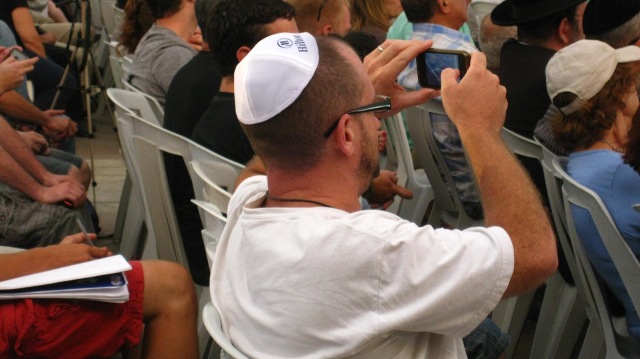 Clearly a tourist, this man’s kippah is from the Hilton.

I tried really hard to eavesdrop on this conversation, what we caught in passing was talk about “September,” when the PLO plans to ask the UNSC for recognition as a state on the pre-1967 borders.

I loitered as close as I could, but didn’t really catch anything. The guy in the overalls, however, was part of a bus tour from the US that came in special for the Glenn rally. 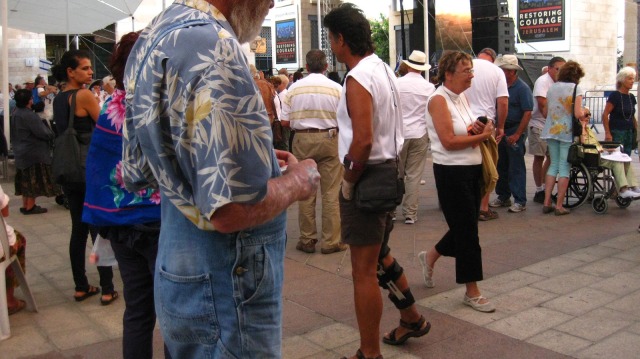 I’m not sure if you can see the GIANT star of david tatoo on his right hand here…..  But his second guy in overalls was also part of a bus tour. 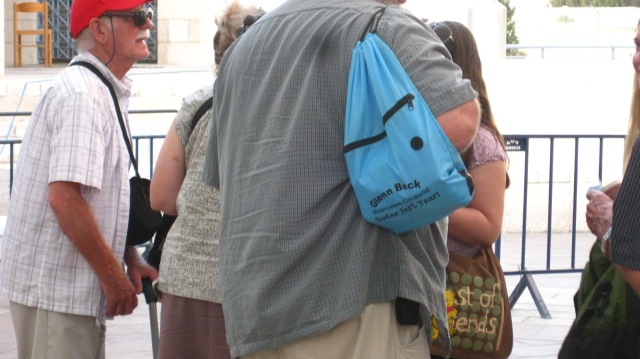 Some of the tour groups got backpacks. 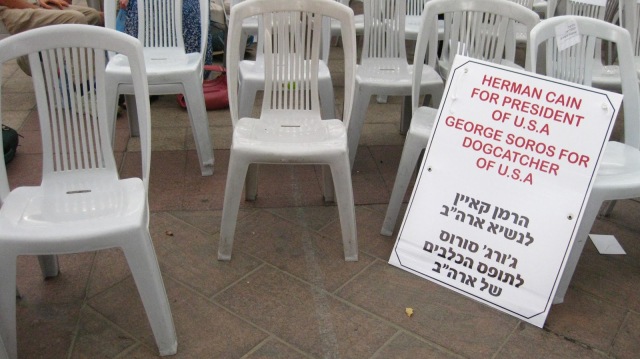 Others clearly came with a secondary political agenda.

And for the record, I think George Soros, and his foundation, are stellar. Also, George, want to fund my PhD?

Herman Cain, my American compatriot explained to me, is a Black republican who is racist. Her words not mine. My internet skillz have also revealed that he was, in fact, in Israel for the rally. According to his campaign website, he has a zero budget for campaign advertising, and just spends money on travel.

We wondered who paid for the rally. I’m told Glenn, who used to present for Fox, was let go before the rally took place.

Also, a large man who I can pretty comfortably call an evangelical Christian, gave me this. Its a trillion US dollars, from Jesus, which will pay my sinful debt to god once I reach those pearly gates.

Since I’m sure I haven’t committed a trillion dollars worth of sin yet, I guess I’m in pretty good shape.