A river runs through it. Okay, not quite, but the Bethlehem Museum does literally have an old Roman water pipe bisecting the building.

The ancient stonework that once ran water from Soloman’s Pools south-west of Bethlehem (near Al-Khader) to Jerusalem has been excavated by Museum founders and put on display along with much of the city’s other historical artefacts.

The massive pipe looks like a simple stone bank when you walk into the Museum, but the friendly face at the front counter will quickly explain that the imposing stone blocks are part of the impressive aquaduct system that kept the growing city of Jerusalem hydrated.

Just how impressive the system was, however, really hits home in the final room of the museum, where the pipe has been dismantled, to show viewers its internal workings. Two bits of pipe are showcased. And by pipe, I mean massive carved stone bricks that you would need an elephant to lift.

That this ‘pipeline’ actually still sits under the Bethlehem-Hebron road is a little mind boggling. To think: Roman aquaducts connecting Solomon’s pools to Jerusalem still run between the sister cities, and is (at least I like to imagine)–somewhere well under the ground–running beneath Aida camp, the wall, and the settlements.

Sadly, fascinating things at the museum started and ended with the pipeline, which itself wasn’t so much explained or integrated into the rest of the exhibits (well, only insofar as it literally ran underneath display cases, as you can see at the bottom of the image below). 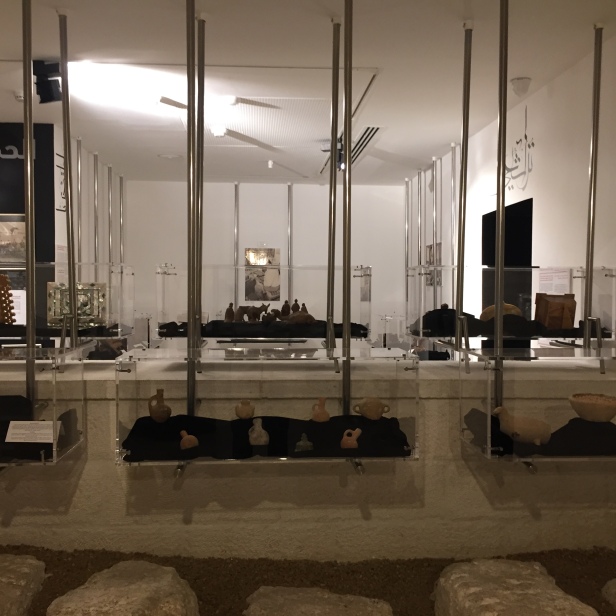 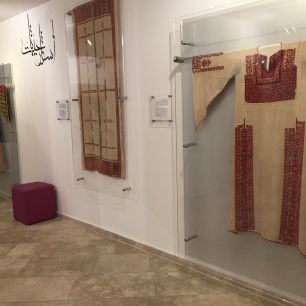 The items on display ranged from old bibles to oil lamps in the first room, to mother of pearl carvings and olive wood crosses in the second. A third displayed very early images of Palestinian families, posing for some of the region’s first commercial photographs, which did put a nice face to the aim of the Museum, to show the ‘Treasures of Palestine- through your eyes oh Bethlehem.’

The narrative that the Museum was selling, however, seemed a bit fragmented.

Where the stated mission of the project is “fostering a deeper understanding and appreciation for the role Palestinian Arab Christians play in preserving the Palestinian’s heritage, identity, and culture,”  it also seemed quite intent on debunking the Zionist myth of a “land without a people for a people without a land.”

So, even though the exhibits are quite literally sitting on Roman aqueducts, narrative insists “the culture of this land began with the Palestinians who were its first inhabitants etc etc.” This is made in a decidedly Christian vein, so even if we want to claim Romans as early Palestinians, this doesn’t quite jive with the other claims the museum is making.

So, the museum seems a bit confused, caught between narratives that seem to deny the role of early Pagan, Jewish, Canaanite, Phonecian (full disclosure, I’m no expert on ancient history) and later Muslim rulers and communities in constructing the infrastructure, as well as the culture of Bethlehem today.

That all said, the museum is very well air conditioned, and has a lovely cafe….

Twenty NIS will gain you entry, and a careful look at each of the artefacts won’t take you more than 30 minutes.

Find the Bethlehem Museum right across the road from Jacir Palace Intercontinental, which is just down the road from where the wall runs across Hebron Road.